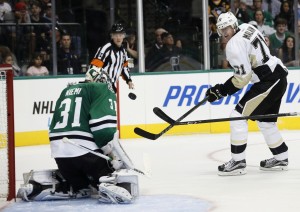 The Penguins are currently riding a 3 game winning streak, beating the Senators, Maple Leafs, and Panthers all on home ice.

So the Penguins are right back on track, right?  They’ve won 3 in a row now!

Let’s start with looking at the opponents the Penguins have played so far:

The Penguins started the season with 2 road games, the first being in Dallas against the Stars.  The Stars have Jamie Benn and Tyler Seguin, who are currently both tied for 2nd in the NHL with 10 points.  The Stars are a potential playoff hockey team, and the Penguins were held without a goal and lost 3-0.

After playing Dallas, the Penguins traveled to Arizona to play the Coyotes.  The Coyotes have been a huge surprise.  No one expected them to be good, but they do have a lot of young talent, and Domi and Duclair are showing they belong in the NHL.  The Yotes are still in a rebuilding stage, but their young team is playing well right now, and they are a bubble team that could sneak into the playoffs.  The Penguins lost 2-1.

The Canadiens are the only undefeated team in hockey, and understandably so.  The Penguins dropped this game 3-2 to a definite playoff bound hockey team.

So the Penguins scored 3 goals in the first 3 games against three potential playoff teams.  Ouch.

Now let’s talk about who they beat in the past 3 games.  They got their first win of the season against the Senators in a game where they played decent, but still only snuck out a 2-0 win, thanks to a great game by Marc-Andre Fleury.  Personally, I consider Ottawa a bubble team as well.  They’re a solid hockey team, but they’re nothing super special.

The Penguins then beat the Maple Leafs…yeah they have Babcock behind the bench now, but the Leafs have one of the worst teams in hockey.  The Penguins should have pounded on the Maple Leafs at home, especially with their offense, but once again, just edged them 2-1.

Just 2 nights ago, the Penguins beat the Panthers.  The Panthers are also a decent hokcey team that should be fighting for a playoff spot.  That being said, the Penguins had a 2-0 lead in the third period, blew the lead, and ended up winning in overtime courtesy to Jonathan Huberdeau taking a terrible penalty that gave the Penguins a 4 on 3 in OT.

Moral of the story, even with 3 wins in a row, the Penguins have not convinced me at all.  They have beat 3 teams that are either bubble playoff teams or teams that will not make the playoffs, and lost to the 3 potential playoff teams that they faced.  To top it all off, they are barely squeaking by these bad teams.

Also, during the Penguins 0-3 stretch, they were either tied or were losing throughout all 3 games (they never had a lead at any point during these 3 games).  They allowed the first goal in all three of these games.  The Penguins need to be better in this category.  They did not have a win last year when they were trailing heading into the 3rd period.  Now, that record will never be a good one, but you have to be able to win games on occasion when playing from behind.

On the other hand, during the Penguins 3-0 stretch, they have been either tied or winning throughout all 3 games (they have never been trailing at any point during these 3 games).  They have scored the first goal in all three of these games.  This is a good sign, but the Penguins cannot just rely on scoring the first goal and holding a lead to win hockey games.

Before I take a look at some more stats, I want to note that the Penguins have a far better offense than defense on paper.  Their offense is stacked with the likes of Crosby, Malkin, Kessel, Hornqvist, Bonino, and Dupuis (who will be back in action tonight!!!) just to name a few.  Considering there are 30 NHL teams, I would expect the Penguins to finish the season in the top 5 in goals for per game, and about 13-18th in terms of goals against, which is middle of the pack.

Knowing this, let’s look at where the Penguins stand so far this season.

Once again, that’s not a typo.

The defense, as well as Fleury, has been spectacular so far.  They have exceeded expectations, at least in regards to allowing goals.  I am very proud with what the defense has been able to do to keep the Penguins in hockey games.  That being said, the defense is not going to keep up what they’re doing.  Fleury isn’t going to be able to maintain his 1.85 GAA (goals against average) and .937 save percentage.  The defense will definitely decline as the season goes on.

When that happens, the offense needs to start scoring…which it hasn’t been.

The Penguins eclipsed 2 goals for the first time 2 days ago, which is hard to believe, and the 3rd goal came in OT.  Notable players such as Patric Hornqvist, Chris Kunitz, David Perron, and Nick Bonino all have 0 goals.

Interestingly enough, the Penguins actually rank 2nd in the NHL in shots on goal, with 33 shots per game.  This can be seen as both encouraging and discouraging.  It is encouraging in the sense that if the Penguins can keep putting 33 shots on goal per game, the goals should come.  The discouraging part about this is that the goals have not come so far, despite the high shot totals.  Yeah, the Penguins will end the season averaging better than 1.67 goals per game, but can this team become the elite offensive juggernaut that we all thought they would be?

Until that happens, I am not entirely convinced this Penguins team is all it is talked up to be.  Yeah, they’re great on paper (one of the best teams on paper actually), but in the NHL, it’s all about production.  Until they show more production from their offense, don’t have high expectations.  This team is allowing more goals than they’re scoring on average…with the 2nd best goals against average in the league.

It is early in the season, but the Penguins need to start scoring goals.  It’s that simple.

The Pens play Dallas again tonight, but this time, it will be at home. Expect the Penguins to have trouble scoring once again tonight against Antti Niemi, the probable starter for the Stars, who blanked the Penguins in the season opener.

On the brighter side of things, as mentioned earlier, Pascal Dupuis is back in the lineup tonight.  Look for him to make an impact.

Also, Daniel Sprong will not play tonight, due to the fact that he wasn’t able to practice with the team while having Visa issues.

I will also be publishing an article tonight after the Stars vs. Penguins game with a recap and impressions as usual.

As always, thanks to all who read my blog!  Let’s hope the Penguins keep the winning ways going, whether through offense or defense…

Is A 3 Game Win Streak Enough?